Year of the Goat 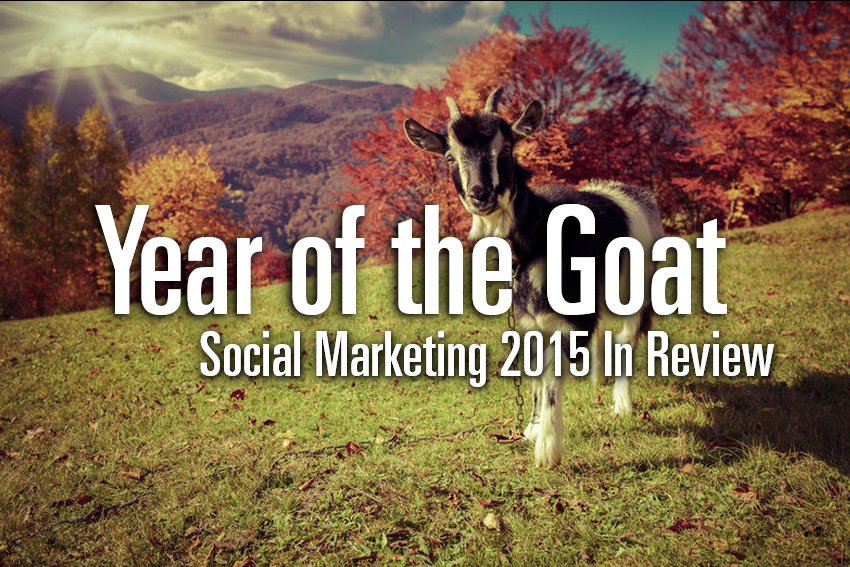 A Brief History of Social Marketing 2015

Calm and gentle, 2015 sure was. We didn’t see a whole lot of anything exciting going on in the past 11 months of social marketing. Everything overall stayed status quo when it comes to an Apple-like style of advancements. We ask ourselves, is it the result of the all-to-comfortable producers or the slow paced business users? Let’s see…

The Year of Video. Giggle.

As we look back to the predictions that kicked off 2015, we now know they were meant for multiple years to see real progress. Come on, 2015 was suppose to be the year of video. This is kind of funny since it’s been the year of video for the past couple years, and it’s already included in some predictions for 2016. Sure, companies love the idea of using video for promotions, but most are still trying to figure out how to make them and make them really work. Most social networks have been equipped for video, at different levels, for a long while. They just keep tweaking how businesses can upload or filter the video in the process. This may just be a marketing ploy, so they can promote “offering a new service,” that’s not so great. I am sure we will revisit video again in our 2016 predictions, as everyone else will, in the coming weeks.

Another great prediction for 2015 was the rise of content marketing and breaking through the density of social media posting. Well, unless you are in marketing, most companies are still working to understand this one. And social marketing firms are still trying to impress how important content marketing is for getting past the thick cloud of continuous posts and existing content. Here comes the rise of paid ads in social marketing.

One of the few changes with some substance to it in 2015, across all social media platforms, is the rise of paid advertising. Of course the concept is nothing new, but paid advertising has certainly evolved and has greater benefits – cutting through the crowd. Still, in most cases you can work business pages to your benefit without paying. On Facebook, not so much… business pages are ghost towns unless you are a mega company or you do some Paid Advertising. We will say that Facebook still keeps it affordable, and their system works. For Instagram and Pinterest, they are just getting their feet wet and realizing how to work the benefits for all. As long as they don’t get greedy, all will continue to reap the benefits. LinkedIn and Twitter may need to rethink their paid advertising models just a little. One charges well above the average, and the other is quite affordable, but gets you a hollow audience.

Groups Working Together… Still trying to work together.

And now it’s time for that group thang. Communities, groups and lists are still in development. Surprise! We may be partial, but Google+ offers the best developed group engagement hands down. Whether business, hobby or entertainment… you can get your quality fix on Google+ with people you don’t know. LinkedIn communities still seem to suffer from that “all about me” mentality, Facebook has “everyone is a critic” syndrome (excluding the private groups) and most users are still trying to figure out how Twitter lists can benefit them. Let’s all try a little harder in 2016.

Medium rules all here. It may be the silent but deadly winner. Instead of world domination, they have kept their focus on being the prime promoter of great blogs and interaction with them. Medium also continues to improve the network to benefit the customer. LinkedIn’s blog pages have beat Facebook to the punch, but Facebook’s notes is still in the works for posting blog style. Twitter is still fighting its 140 characters per post attitudes. Stubbornness? Either way you promote your blog, get it done. Like print and email, blog continue to be an important part of social marketing.The rush of individuals to social media is growing annually, while some businesses in 2015 still didn’t get it or still think their brother’s girlfriend’s cousin, who knows how to turn on a computer, can run their accounts. This is not good for SEO or ROI. In the coming year expect to see more businesses realizing the benefits of social marketing, using it for planned cross marketing and taking it more seriously. At least, we hope so.

Some other notable goodness going on in 2015…

From here on we’ve decided not to mention the big guys too much. We all know who they are. They may not have seen huge, new competitors this year, but with the age of “social niche” upon us, we hope they realize the time clock is ticking. Like television, there was a day when only a couple big guys dominated. Now look at the TV offerings! There is a channel for everyone. This could seem like job security for the monster social networks of today, but they can also ask themselves where is MySpace and what did happen to MTV?

Time for some not so newbies worthy of a mention…

Branded.me
Powered by LinkedIn, Branded.me has an attractive, sleek look. It’s all about personal branding and building a personal branding website in seconds. The problem is that it’s basically an extension of LinkedIn. It doesn’t have its own brand. We are anxious to see which direction this one heads in the coming year.

HollerHear
We really enjoyed this one. Talk about something new, or should we say listen? Not so much about video, HollerHear promotes the art of audio in 15 second clips. It’s either the new wave of social fun or Twitter’s audio counterpart. We have hopes.

Wanelo
Your social media shopping guide and network. Will this be Pinterest’s big rival with all of its strong visuals and management tools, or will Pinterest consume them first?

Ello
It is Facebook without advertising. There is something creative to this one. Well, we just thought we’d give them onemore try before calling it quits. On that note…

Till Death Do Us Part

You should get the picture here. MySpace, Foursquare, Snapchat and Twitter if they don’t get theirs act together, may have a foot in the grave after this year. Can we include #hashtags in this list? Admittedly, they really are a handy search tool across all the networks. Oh wait, not LinkedIn. They don’t utilize #hashtags anymore. We are still trying to figure this one out. Is it a mistake or does LinkedIn think they may be dying too? .One thing we can say is there is much to look forward to after this social marketing doozy of a year. Curiosity and cleverness dominates in 2016, the year of the “fire” monkey. Time for some real competition with social business and the rise of the “social niche” market. Watch four 2016 Preview releasing soon!

PS – Note to Facebook, how many more times do we have to hear about you change your algorithms? Is this a marketing scheme, or are you really accomplishing something over there that benefits the customer?