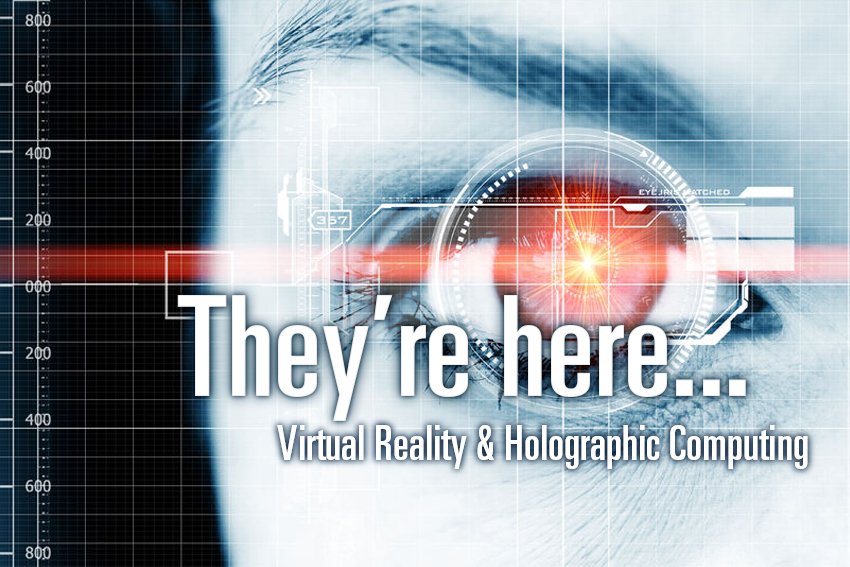 Before we take off into this new reality, let’s do a 101 on the technologies at hand. Virtual Reality (VR), sometimes referred to as immersive multimedia, shows us a virtual world which isn’t really there. VR makes us feel like we are flying through space, walking through a field and visiting places across the globe… from our living room. And simply put, Holographic Computing (holograms) creates 3 dimensional objects and forms in our real space. Both technologies make use of glasses or lenses to show you the virtual world and objects placed within our environment.

Whether you preferred Tom Cruz’s ’Minority Report’ or Arnold Schwarzenegger’s ‘Total Recall’ – both concepts are now becoming reality. VR and holograms may not be new ideas, but the technology making them come to life is quite innovative. Affordability and business advantages become our next questions. Are Virtual Reality and Holographic Computing really viable options for ROI? With all of the tech giants and startups pushing the envelope on this topic, we are definitely on the cusp of a breakthrough making these technologies mainstream and an invaluable investment. Let’s take a look:

Google Glass: $1,000+
Arguably the pioneer of VR and the Hologram movement, Google Glass hit the scene in 2013. While not a full blown holographic computing device, the glasses gave users the ability to email, run apps, browse the internet and virtually attend meetings while picking up the kids at school. Unfortunately, privacy concerns quickly doomed Glass. Most complaints came from people feeling they were being unknowingly videotaped by Glass wearers, and the owners of Glass started feeling unsafe wearing them. This buried the project a bit. But that’s not the end of this story. Google is too much of a powerhouse. Glass is still widely used and rumors are swirling that a Glass 2 project is in the pipeline.

Google Glass Put to Good Use:
• Medical field delivers live-surgery demonstrations, remote medical training and solutions in telemedicine.
• Industries are wearing Glass across the workforce expediting communications and training from multiple locations.
• Arts & entertainment world is putting a twist on gaming, plus giving virtual visits to museums and cultural destinations.
… just to name a few ideas.

Envelop VR: $600-$800+ for a required headset
Coming onto the scene within the past year, this company is picking up steam. Envelop’s VR computing software gives you the ability to run any Windows application in a virtual environment. Think about this one. Envelop touts the ability to give you an ‘infinite’ number of screens in your virtual reality world that you can configure in a variety of sizes and locations. Envelop also pushes its ability to enable you to make project changes within the VR environment without the need to go back to your 2D environment. A public Beta version used in conjunction with the HTC Vive and Oculous Rift headset was released in August. This idea may be hard to get your arms around, but think about the ability to step inside your computer programs virtually. Envelop has lots of potential. This fully immersive platform puts you inside your project and quickly allows you to see changes that need to be made – making it extremely valuable to designers, architects, engineers and so many others. Imagine the possibilities:

Microsoft HoloLens: $3,000
Mixed Reality is what Microsoft calls it, “it’s a fully self-contained, holographic computer, enabling you to interact with holograms in your world.” You don’t just put on a headset and go on a journey. With HoloLens you remain aware of your surroundings while you interact with associates and clients from your virtual world. You will also interact with data within that world in a very natural way. Just looking at holograms or making simple hand movements will affect apps, items and move things virtually within your reality. Voice commands trigger the artificial intelligence (AI) system, Cortana, to help you along. According to Microsoft “the more she learns about you, the better she gets.” This is the ‘Minority Report’ we’ve been waiting for. Hundreds of apps are currently available for use with HoloLens. They are tailored for gamers, personal use and of course business:

HoloLens Put to Good Use:
• Collaborate and communicate on projects visually with associates located across the world.
• Shape holograms to fine-tune designs, share ideas and help explain your creation in relation to the real world.
• GAMING!

Oculus: $600+ for a headset, additional $1,000+ for computer system that supports software
Ocular came to be in 2012, was purchased by Facebook in 2014, and Oculus recently released the Rift VR headset in early 2016. Lately, this one has been all about gaming. The incredible VR experience makes you believe you are in the game, whether it’s killing monsters or running black ops in a hostile Middle Eastern country. But with Facebook at the helm you can expect to experience so much more. How about a virtual vacation? Leave your daily stress behind and take a getaway to somewhere you’ve only dreamed about. This one is so ‘Total Recall’ in style. By most accounts, this technology is very impressive and promises to get even better. I will just mention… Oculus TOUCH is coming! Look out for the possibilities:

Virtual Reality and Holographic Computing may not be mainstream yet, but daily exponential advancements in their technology brings us closer to the future of computing and how it affects business. It’s best to start preparing and imagining because the sky is no longer the limit here. Now, let’s mix in a little AI and BAM! Singularity gets even closer.