There’s A New Season of Social

The cold and dreary winter is now behind us. It’s time for some late spring cleaning and a fresh look at Social Media’s new “gadgets” for marketing. Have our favorite platforms sprouted any new features, or have they become too sedentary? Well I am here to say there is much good news my friends. A mix of early warm temps and plenty of heavy rains inspired a lot of new growth. 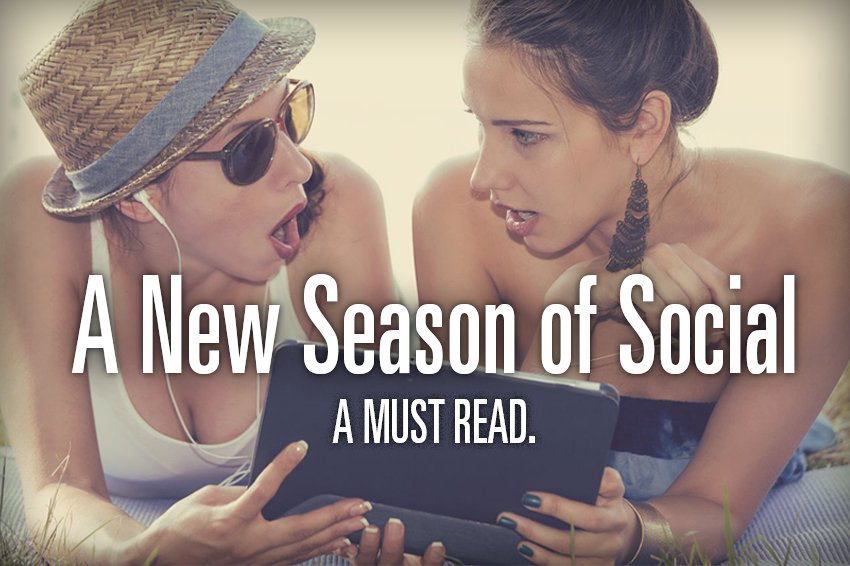 A New Seasons of Social Media 2017

Since being acquired by Microsoft, LinkedIn has become a real mover and shaker. I’m even shocked at this one. If you haven’t been on the network lately, it has a new layout resembling Facebook-like features It’s. definitely an upgrade from the tired old look we’ve come to settle with. In addition they’ve recently re-introduced #hashtags as a feature. A little glitchy from time-to-time, but you have to admit this tool is not going away. So they are finally back with LinkedIn. And if it’s really been a long while since you’ve logged in, the ability to post articles (aka blog posts) is now available to everyone. I believe they release this stuff slowly to see what people will pay for with a Pro Account. A bit of a greedy tactic LinkedIn is known for. Another nice addition is the introduction of LinkedIn ProFinder. It connects people looking for skills with those that have them. It’s more of a B2B or freelance thing, and not a job board. It’s a cool feature, but of course you must have a Pro Account to reap the true benefits. A standard account will let you submit 10 project proposals for free, and after that you’ll need to pay for a Pro Account to continue using this feature. Along with LinkedIn’s updated design, they have improved their statistics reporting, and there are multiple other new features coming, but way too clunky to mention at this time. Their handling of images and videos is still outdated, but I am still finding myself on this network more and more. It’s coming into its own… finally.

Well, I thought I would start this blog out slow and then hit you with a punch of updates from Facebook. There are so many from this platform I couldn’t decide what to focus on. I keep hearing people complain that Facebook is just a dog and pony show, but then they really don’t know Facebook. One of the many updates is their improved business page layouts based on a business’s market. The various templates help a business showcase specific services and CTA’s in an enhanced view. LinkedIn thinks they’re catching up on layout — not so much. In addition to many design adjustments, I’m sure you’ve already come into contact with Facebook’s Live Feeds feature, and did you see that Facebook Stories have also crept in to play. The latter is still brewing. Some extremely unfortunate broadcasts have slowed the Live Feeds down, but his is temporary. Like only a day temporary. They just made it possible to stream live from your desktop and laptop. And staying along those lines, Facebook also introduced Live 360 providing the ability to broadcast, you guessed it, 360 degree imagery. Don’t forget you also have Facebook Live and Facebook Virtual Reality with Oculus headsets. Oh my! Have you seen their Virtual Pop-ups at airports? There’s just too much going on here to get into detail.

A couple additional notes, or features to watch and try, Facebook is giving advertisers the ability to place In-Stream Video ads as well as placing ads into a live video (still brewing). Plus, if you haven’t tried the very robust Facebook Business Account Manager or Facebook Workplace… you have another thing coming! We see Space as the next frontier for this one.

Hate to say it but I’m somewhat disappointed in Google+. It seems every time I’m on there, something’s changed but not for the better. They just keep rearranging things. I can’t imagine this is their idea of breathing new life into the platform. It’s unfortunate because it actually does have a large active user base, plus, it’s Google. They need to devise a solid plan and stick with it. Google+ is like a little girl that hasn’t carved here niche in this world. Decide what you want to become for once already!!! Google took a step forward a long time ago when they made Youtube a stand-alone platform from Google+, but this has been the only major adjustment for a long while. They continue to do what they do — the same.

On a lighter note, Google+ did add a recommendations section. The only thing – it just doesn’t make sense for me to follow someone that hasn’t been on in a year. What is going on here? Why recommend? Thankfully for Google+, there are still two major things keeping this network relevant – the large, still active user base and most importantly the fact that it’s part of Google. You can’t beat the benefits to your search engine optimization.

For a platform that’s seen high level executives jump ship and has been for sale with no takers – Twitter is doing fairly well. It’s no secret that Twitter had/has a real problem with a large unsavory user base (they are currently deleting many ghost members). This has led to a recent update in Twitter’s algorithms to identify abusive accounts and limit their functionality while giving good users new filtering tools to help curb harassment. They also changed the egg avatar on accounts to a gender neutral image in hopes of persuading users to upload an avatar or headshot. Giggle. And Twitter is a “social” media network, so they also recently began incorporating a “connect” tab to facilitate better interactions. A little slow at this punch, but I think all of these updates will lead to less ghost interaction and more quality possibilities. And for those of you who love Gif’s, Twitter has added a search that quickly lets you find and add the perfect one to your post. In addition, the 140 character limit that’s apparently set in stone does still exist, but now images and an @reply will not go against this countdown. Thank goodness!

Two additional notables – Twitter recently updated its Privacy & Safety Settings Options. They are giving the user more control of their data and what they see. That’s right, you get the option instead of those algorithm change junkies like Facebook. We will see where this leads. Twitter has also been working to easily incorporate Live Video Streaming, like everyone else, but they are still working on this clunky junk. So stay tuned on this one.

Continuing on its path to become a giant for business, Instagram is doing just that. They have been rolling out multiple feature updates including image posts (aka carousel posts) similar to what Facebook offers. This lets you create a slideshow of products to squeeze in the most potential for each post. And in addition to the very new Instagram Stories, they are also in the process of rolling out Story Ads enabling businesses and marketers to run ads within Stories. This is another great feature to compliment the ever improving Instagram Ads and their Lead Ads feature which is also relatively new. Lead Ads collect customers’ information with a pre-filled form. Very cool. And hello… what are these #HashtagStickers? Like!

All in all, Instagram continues to make the push to be a major player for businesses by rolling out features that will give you the ability to continuously engage existing customers and reach potential ones. Its filters are being updated regularly with options like Boomerang and Rewind, and its ways of connecting people with people and businesses with people and businesses with businesses are rewarding and easy. They are part of the Facebook Family. So this makes sense. Both Facebook and Instagram continue to work on integrations with shopping. Next up, a fully functional Web App for Instagram. That’s right, desktop improvements. And there is a whole lot more coming to an Instagram App near you.

Besides their much needed redesign… do I really have to chat about this one? They are doing a lot of catching up to the big boys.

Let’s just say that there’s much more to report from the top social media platforms. This blog could go on forever. I know there are other mentionables like Pinterest and YouTube. Either way it is excellent to know most of these giants are not sitting idle during the winter months. Updates are flying out the door faster than you can say Jack Robinson!