The Horror of It.

There is a fine line separating enjoyment and experiencing nightmares on social media… the nightmares horror movies are made of. Let’s be realistic. Many people already use these networks for less than admirable purposes, or they just don’t know any better. In the spirit of the Halloween season, we decided to have a little fun with comparisons on this one. Truth be told, many social media networks remind us of these horrors every day. So let’s see what you think. WARNING: frightening content ahead! We hope you and your business are not involved. 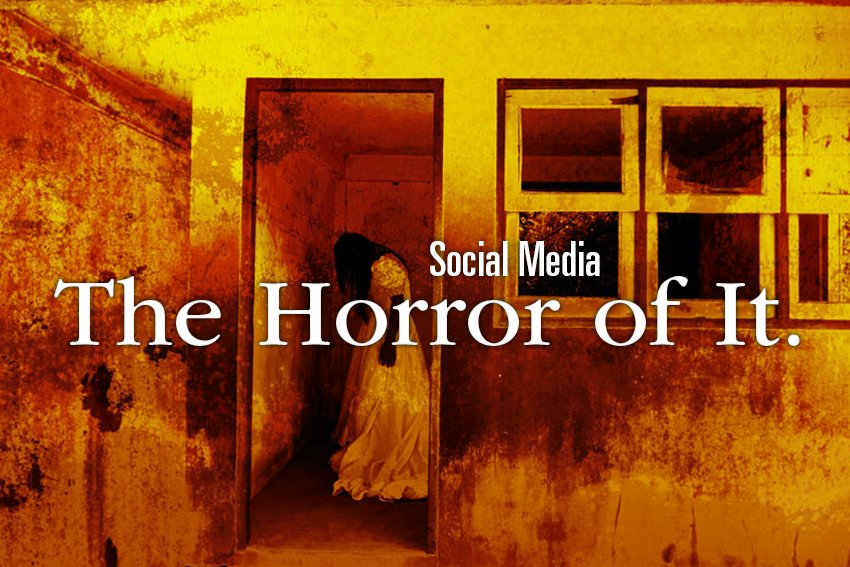 The Horror of Social Media

Considering the fact that most people show symptoms of having a multiple personality disorder, this movie is a great example. I suppose what you see and read on Facebook triggers whether you’ll be the Princess, Billy or Simon on any given day. I know. You just logged in to see what your family and friends were up to, but that one political post you came across was in essence a blatant call to action, right? You see red and the next thing you know, you’ve written and posted a scathing remark that would be disturbing to a seasoned federal penitentiary inmate! It’s ok, you’re not alone. Besides, there’s always the delete button, right?

Your so vain, you probably think this LinkedIn is all about you. And your correct to a certain extent. LinkedIn is for the Patrick Bateman that hides in all of us. You use this network to showcase your perfect job (Vice President of XYZ company right?), all of your connections, endorsements, recommendations, etc. But what happens when you run into the profile of an old classmate whose cred looks a little too perfect? You know, the owner of ABC company who made his first million dollars at the age of 8 with his lemonade stands and has never looked back. Well, you can relax and tone down those homicidal feelings. Chances are, he might just be an average guy working an average job, and everything else is just smoke and mirrors. Remember that you can’t believe everything you see on LinkedIn.

This is what dreams are made of, or maybe nightmares if you spend too much time on this platform. A fantasy world containing hundreds of thousands of product images and recipes you wish you could have and have time to make.  Unfortunately, you’ll likely never attain these and that’s when the depression sets in. Your TV stand, coffee table, couch and so on just don’t stack up against those majestical items you browse through everyday. You’ve now reached the point of obsession and need more. The question is how far are you willing to go, and what are you willing to give up to make Pinterest come true? Just remember to try and keep things in perspective, otherwise you may find yourself enlisting help from The Djinn and that’s when your nightmare really begins.

The cold hard fact is that many social platforms drive you to become someone you’re not. It’s almost like you’ve become possessed by an otherworldly force that makes you take photos constantly of things you normally wouldn’t bat an eyelash at. Instagram is a prime example driving this behavior. You find yourself taking pictures next to a Porsche and posting it like it’s yours. And the misleading posts go on. As your fan base grows you can’t stop making yourself out to be the world traveler, the Betty Crocker of kitchens, the Martha Stewart of home decorating and the life of the party where you really just sat in the corner taking pictures. Unfortunately Father Karras is coming for you. He’ll take the shape of someone who actually knows the truth and will cleanse you by removing the demon that has temporarily inhabited your body, thus revealing who you really are one day!

Nothing like hanging out and watching videos all day, right? Regardless of what you’re in the mood for, YouTube’s extensive user generated video library has you covered. However, remain wary of what you are viewing. There are some very disturbing videos that circulate throughout that network. What may just seem like a harmless video of kittens may have a deeper, darker, more ominous force behind it and video related to it. And if the phone rings after you’ve watched, Samara is likely calling to say you’ve got 7 days to get your affairs in order. Now go outside to play!

The lightning fast speed and interconnectivity of this network gives you the ability to send your energy electronically across the world via Tweets. We hope it’s not negative energy! While you may not have the murderous intent of Karl Hochman, aka “The Address Book Killer,” Twitter could definitely give you the ability to do some damage. One ruthless Tweet could be re-tweeted hundreds of times and viewed by thousands of people instantly and the subject of your torturous Tweet will suffer real, irreparable harm. Without a doubt, Twitter can really put a sadistic twist on the phrase “reach out and touch someone.”

These may have been all for fun, but heed my warning. Don’t ever get caught in these nightmares, specially in business. And if you have’t seen some of the gems I’ve listed… you must see!