The Future of Marketing is Here 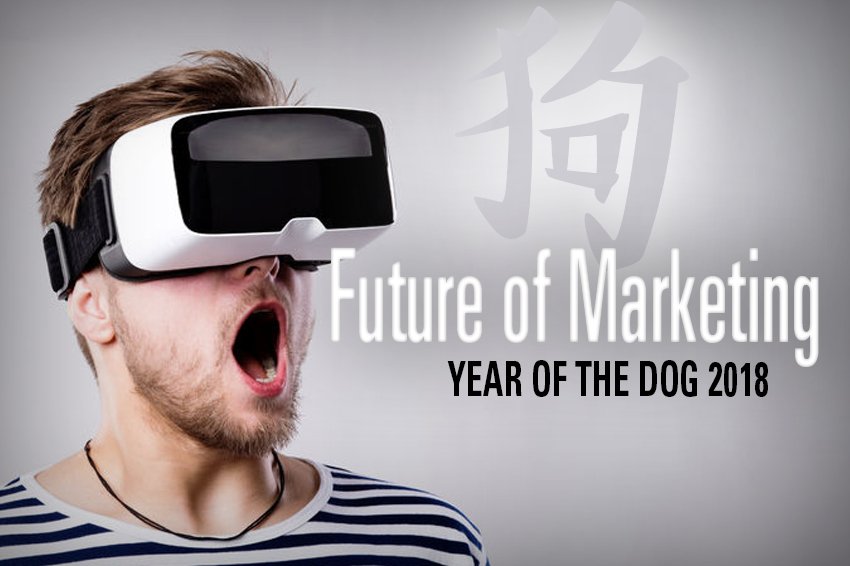 The Year of the Earth Dog is a good time for change and for the start of interesringly new business ventures. Is your business ready?

We are all working to close out 2017 with a flurry of activity aimed at improving better customer experiences and staying on top of new marketing trends to bring in returns for 2018. You can’t miss all of the newly progressive features hitting social and digital outlets including live video streaming, integrated editing tools and business communication services, not to mention AI and Virtual Reality technologies. While other so-called ‘trending’ services and features from the past year have fallen far down by the wayside, there are those still building excitement and gaining momentum. It’s that time to review what 2018 has in store.

BIGs Are Making Big Waves in the Dog Pool this Year.

Twitter finally expands by doubling its Tweet character count from 140 to 280. We felt the ground shake a little on this one. This aggressive and too long awaited change may stem from a spotlight the @RealDonaldTrump has been shining on this network. Gone are the days of stripping your posts down to abbreviated gibberish. Well, I am sure some posts will still remain gibberish.

Then there’s the Tweetstorm. It is a new feature enabling users to string a series of Tweets together on Twitter in order to maximize their visibility in this fast-paced environment. This feature has the potential to add a lot of value, or get lost in all of the fake news shuffle.

SPECIAL NOTE: Speaking of fake, another topic for continued discussion in 2018 will be addressing fake accounts, fake ads and hate accounts littering the social sphere. This may be an ongoing battle for years to come.

Talking about trouble, Facebook is definitely coming off of a year filled with it. Its Live Video Streaming feature produced many 15 minutes of fame including too many personal disasters. And you can’t forget, nor avoid, the controversy over the fake accounts and fake ads epidemic created by Russia to affect elections. Here’s where you can refer to the SPECIAL NOTE above.

Fortunately for Facebook, 2018 is already presenting big potential for this top dog – specially for businesses on this network. Facebook even gets its own bulleted list of goodness:

Do you see a trend emerging here for Facebook? It’s finally remembering that helping businesses will pay for the meal ticket. There is even talk of enhancing users’ feeds to highlight organic business posts. That’s almost as huge a leap as Twitter’s 280 characters. We’ll be visiting Facebook again. Don’t you worry, there is more to come…

Moving On. And Moving On Up.

The Snapchat overhaul may be the next best things since sliced bread and Twitter’s character count expansion. As always, Snapchat has been popular with the kids, but not so much with adults. This platform has been plagued by reviews saying it’s too hard to use. And its never really been a sought after platform for business marketing. Did all of the rage from the younger crowd cause Snapchat to turn a blind eye for too long? Unfortunately for them, the children got bored and moved on to something else. Without much of a stable user base, Snapchat found itself on the outs. 2018 may be the year for this dog to learn some new tricks. They have recently announced they are redesigning the entire platform in order to appeal to a broader audience… talk about change and possibly a new option for businesses!

Influencer marketing, like content marketing, is the new talk that’s a real no-brainer. Having ‘influencers’, aka – anyone with hundreds and thousands of followers, pushing your products or services is the new ‘it’ term and marketing trend. Keep in mind, your business can expect to pay a big price for ‘influencers’ to sing your praises. For large companies that’s not really an issue, but for small business owners it might not fit the budget. But you can always shop around for the best deal and possibly score an ‘influencer’ for a reasonable price.

Generation Z. The Millennials are old news and it’s time to focus on Generation Z. That’s right, the oldest of them are barely into their 20’s – which means they are just entering the workforce and will possess spending power for many years to come. Expect businesses and your competition to really hone in on them in the coming year as they try to secure a new fan base for the foreseeable future.

Virtual Reality is definitely impacting the gaming industry, and there are Virtual lounges popping up on every corner putting people on display in funny ways. It’s the implementation of this futuristic technology into various marketing outlets, including social media, that has us wanting a bit more. Not surprising, Facebook touts its Virtual Spaces. It’s a new sector of this platform that includes 360 videos, tools to draw 3D objects and a place to share VR memories. Don’t forget Facebook is also developing its Oculus headsets. This is going to get seriously interesting in the coming year(s).

Then there’s AI. Artificial Intelligence is embedded in business marketing now – whether you realize it or not. Through enhanced PPC advertising, AI-powered content creation, chatbots, customer insights, automated image recognition and the list goes on – AI here.

Any way that you look at it, 2018 should be an intriguing year as we’ll be seeing a flurry of additional activity from marketing outlets and the businesses who use these outlets to their advantage. If any of this comes as new news to you, then you are already way behind. The future of marketing is here.