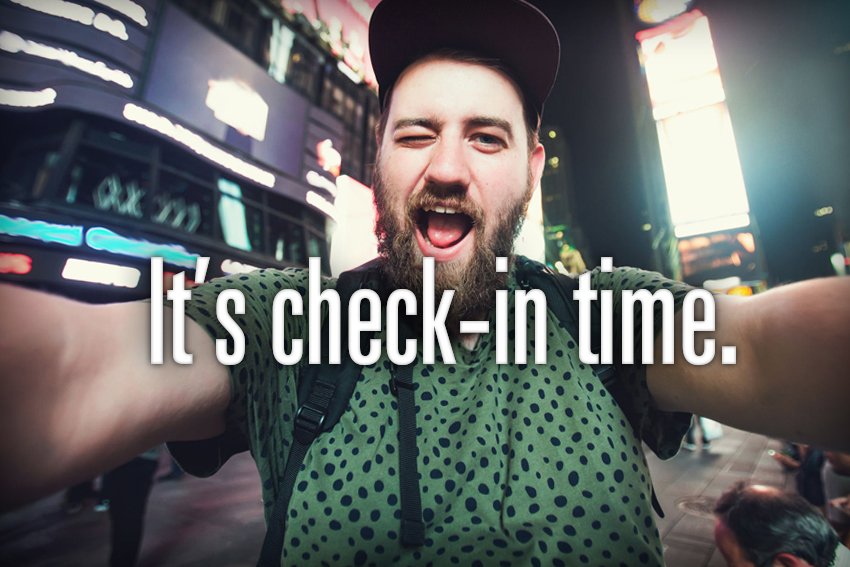 Where are they now?

Although “check-ins” via your social media apps may not be quite as hot as it once was, don’t be fooled by the naysayers who think their usefulness has expired. In my opinion, maybe those individuals just need to get out more. After all, check-in apps can be useful tools. Maybe you’re doing a local pub crawl promotion or jet-setting around the world for business, either way you want people to realize that you’re part of a rock star organization and rock stars don’t sit at home in front of the televisions – even on Friday nights. For business or personal branding, your location or the locations you visit boost awareness of all involved. Check-ins are great tools to encourage brand awareness and promotions to those of us who venture outside our homes on occasion. Obviously, check-in apps have come and gone, and some are still hanging on. Let’s see “where” they are now and which ones are evolving so they’ll never check-out.

45 million users (some do not realize their still users).
The “original” Foursquare was definitely a big one-hit wonder. It did the rounds, has seen the best days and now it’s evolved into a NEW version of Foursquare to keep rockin’! One of the original check-in apps, Foursquare was launched in 2009 and became very popular as friends could easily find each other while they were out and about. Foursquare laid the groundwork for the check-in. Over the years it would endure many tweaks until 2014 when the producers decided to focus this app primarily on local searches rather than check-ins. Foursquare has become more of a directory like the AroundMe app, but satisfies many of its original users still with a companion check-in app named Swarm.

Many preteen children and their friends connect here.
“Turn everyday into a game” is the catchphrase of FourSquare’s companion app Swarm. And as the name suggests – it rocks more like Justin Bieber than Metallica. In the vein of old Foursquare, you can collect coins, be named Mayor and collect/send stickers – oh my! I’m going to stop right there. Ok, there are a couple interesting aspects like “Swarm challenges” that encourage check-ins and qualify for vacations and more. Nevertheless, it feels as though it’s designed more for the Pokemon Go and Snapchat crowd… not sure how much for personal branding or business promotion.

142 million monthly visitors – assuming you trust that.
Originally founded in 2004, Yelp has grown into a behemoth. Its original plan to be a referral network has remained intact, and it’s become so much more than that. Features added in recent years include check-ins, the ability to make reservations and have food delivered to your house. However, Yelp’s main draw is a massive collection of businesses reviews. At a glance, you can quickly see the pros and cons of an establishment you’re about to enter. This app allows you to decide if a business is worthy of your presence. However, Yelp’s biggest strength is also its Achilles heal. There have been countless allegations of Yelp altering negative reviews in return for businesses purchasing advertising on the platform. Shady, without a doubt, I’ll call them the Milli Vanilli of social check-in apps.

Over 1 Billion monthly users. Waaaaaahhh!
This one is truly the King! And not Elvis my friends, not sure he even had that many followers. It’s simple. Basically almost everyone in the world is on Facebook. Even if you only make it to your front porch, you want to be seen and make people envious by utilizing the Facebook check-ins feature. Now I do see people check-in at the grocery store and of course the gym, but while their telling the world what paper towels they are buying, I’m checking in at the Statue of Zeus in Olympia. You see, that’s how it’s done my people! With Facebook you can check-in anywhere. Special note: check-ins at locations you haven’t really been is along the lines of Avril Lavigne lip-syncing on Saturday Night Live. “When” your followers find out – it’s not good for business!

No monthly user numbers available. Secretive and classified, I like it!
Belly is kind of like that unsigned band waiting for its big break. Belly was founded in 2011 and has been chugging along ever since. Although it’s not the standard check-in app, Belly is slowly gaining popularity thanks to new merchants continuing to make the app available in their business locations. Using Belly may not garner you obvious elite status from the public, but it’s still a useful app. It earns you rewards, discounts and perks if you frequently visit participating businesses – great for you and the money that you save. This app is also good for the establishments involved since they can keep track of who is visiting, reward frequent flyers and even have a way to reach out through connected email to keep visitors in the know. If someone hasn’t shown up on your Belly account in a while, it lets you reach out. This makes Belly a win-win app. Another special note: maybe if you earn enough rewards to get VIP treatment, then you can bring friends along to your next visit and have them bask in your greatness.

These days no matter where you are and what app you use – you have options to check-in and tag your location. It’s no longer the fashion, but a way of life. Organizations and businesses would be silly not to play along and reward people for check-ins. Next up – figuring out how to do this! And remember, if you want to be one of the cool kids on the block, these apps may help get you there. So why are you still sitting there? Get out there, get your business connected and start the check-ins.

What are your favorite check-in apps and opportunities?