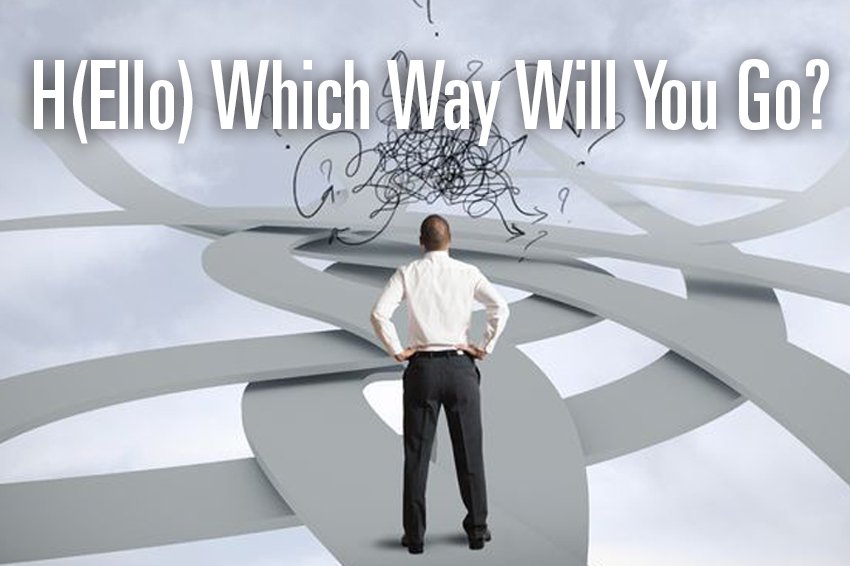 “Is this Really A Debate” PART 2

Which Way To Go With This?

Maybe it was the mystique surrounding Ello, the not so new social network, that originally pulled me in. They were that exclusive club that everyone wanted to be part of but you needed an invitation to join. Ello threw out hints about what they had to offer, how they were better than every other network and so on. It was reminiscent of the 1989 commercial for the Infiniti Q45. If you remember, they never actually showed the vehicle in that ad, they just used the anticipation factor as a tool to build momentum for themselves. In the case of Infiniti however, the vehicles turned out to be fairly spectacular. As for Ello? Well, I basically feel like a little kid on Christmas morning, tearing into my presents, only to discover that Santa only brought me clothes. In other words, disappointment with a capital D. Maybe this is exactly why Ello went with the “shrouded in secrecy” route to begin with… they knew their platform was less than stellar.

Ok, that may be a little harsh considering the platform is extremely new but I tell it like it is. When you milk a person’s anticipation like they did, the product had better deliver. Now, on to what I’ve seen so far from Ello as an “invitee.” Are they capable of becoming a viable network for your business?

Well, I’ve received an abundance of posts and emails about purchasing shirts. I mean, is this a social media platform or a t-shirt factory? Ok, I understand there are a bevy of artists and designers on this network who can make some pretty cool shirts, but I think I will stick to my Under Armour since they accentuate my physique more! Sorry, but if you’re going to blow up my email box with nonsense then you can expect a wise crack in return.

Unfortunately, there is not a whole lot of diversity going on with Ello at the moment. You do get updates from the people that you follow; which is good considering you can create some interaction there. The “Noise” area appears to be posts from people that Ello suspects you will be interested in. In my opinion, the name “Noise” for this section of Ello is perfect considering it’s just a mess of images that users have posted. If you haven’t figured it out yet… Ello seems to be a showcase for creatives, designers, photographers, etc. Sounds good, right? Well, there is no real rhyme or reason to the way it’s organized. Heck, my apartment is better organized. The developers need to spend some time categorizing all of the posts which will make it easier to find what you’re really looking for and interested in. Another aspect missing is communities and groups which are crucial to a business for networking. All of the other platforms offer them, but Ello does tout itself as being different so maybe there is a reason we don’t get any. Yet to be seen.

In my opinion Ello is lacking and needs to make some serious improvements if they expect to last on the social media playing field. They recently added the ability to share video and music clips… a step in the right direction, but they really need to turn it up a notch and quickly. Word on the street is they are on life support. Unfortunately, that leads to investors either bailing out or avoiding Ello like that unattractive co-worker you had a tryst with at last years… well, you get the idea, it’s not good.

You ask… is there any good news for Ello? Well, it’s still here, and it’s like working with a blank slate. Perfect for businesses to really stand out. And, like I said, they are adding some new features. So, they haven’t given up yet. If they are able to secure a means of cash flow for large improvements (which is easier said than done considering they DO NOT SELL ADS), and they do some major tweaking with the organization overall then they just might have a chance. At the moment, all they can do is roll with the punches and keep fighting. All we can do is wait to see if they make it through round 3…